Enjoy a great paddle steamer cruise in Mildura and visit Mungo National Park where you will discover the ancient secrets of the Walls of China. Witness the merging of Australia’s longest river system, the Murray & Darling Rivers at Wentworth before touring into the rich Five River Valley to Kyalite. Then enjoy the spectacular Heart of the Murray sound and light show at Swan Hill’s Pioneer Settlement. At Lake Tyrell witness the amazing reflections before our tour returns to Adelaide.

VIEW PRICES FROM YOUR CITY »

Join now for only

DON'T MISS OUT ON THIS EXCITING HOLIDAY! 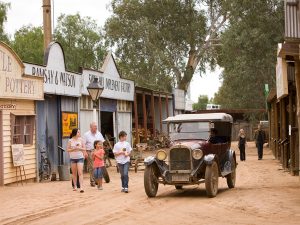 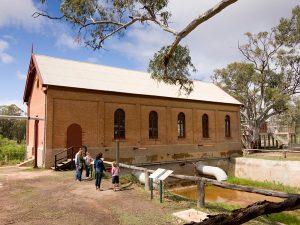 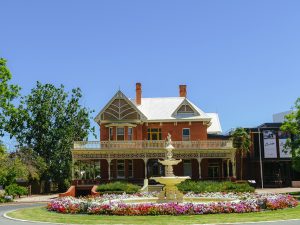 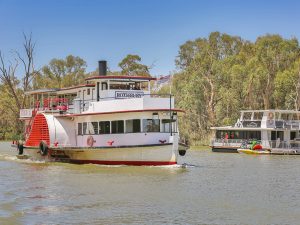 5 days | Pre-register for 2022 –
Adelaide » Mildura » Wentworth » Mungo National Park » Kyalite » Swan Hill » Lake Tyrell
Enjoy a great paddle steamer cruise in Mildura and visit Mungo National Park where you will discover the ancient secrets of the Walls of China. Witness the merging of Australia’s longest river system, the Murray & Darling Rivers at Wentworth before touring into the rich Five River Valley to Kyalite. Then enjoy the spectacular Heart of the Murray sound and light show at Swan Hill’s Pioneer Settlement. At Lake Tyrell witness the amazing reflections before our tour returns to Adelaide.

Pre-register for our 2022 departures
Fill out our enquiry form below and we’ll contact you once more information is available.

Pre-Tour Night for Interstate Connections Only

Travel arrangements commence on the day before the tour departs.

Your adventure begins with a flight to the beautiful city of Adelaide. On arrival, you will be met and transferred to your hotel. The rest of your day is at leisure.
Ask us about a range of optional activities available or simply take a stroll along the newly redeveloped Riverbank precinct or go shopping at nearby Rundle Mall.

Day 1: Adelaide to Mildura via the South Australian Riverland (LD)

Your holiday begins at 8:30am this morning. Adelaide travellers will be met at home and transferred to the Central Bus Station to join the tour. Our travel takes us via Adelaide’s outer Northern Suburbs along the Sturt Highway to the Riverland, including Blanchetown and Waikerie.

Visit Banrock Station where wetlands have been developed near the river which has caused the amazing river bird life to return to the area. At the Wetlands, here we have the opportunity to stroll along the special boardwalks for a close up viewing of the birds. There will be time to enjoy lunch before we continue to Renmark, the main town In the Riverland.

Afterwards, we cross the Murray River and later the Border into Victoria. We arrive at Mildura in the afternoon and check into the Boulevard Motor Inn for our stay. This evening, a 3 course dinner will be served in the restaurant.

After breakfast, enjoy an interesting sightseeing tour of the Victorian oasis town of Mildura. Our touring includes a drive along the beautiful river front area and a visit to “Rio Vista” which was home to the W.B Chaffey original residents. The home is now a museum still furnished in the period of the day and includes many interesting items from the past.

Later, we tour to Woodsies Rock Shop near Irymple. The Rock and Gem shop is an Aladdin’s cave of treasures and houses one of the largest jewellery collections in Australia. Crystals and Gems from all over the world can be seen here.

This afternoon we travel to the original Mildura Wharf to board the historic PS Melbourne for a 2 hour afternoon tea cruise on the Murray River. An entertaining commentary is provided throughout your cruise, providing you with an educational insight on the Murray Darling system and the environs as well as the history of the paddle steamers. After your cruise, we return back to our accommodation for dinner.

Today, we learn the secrets of the famous Mungo Man and take in the majesty of the iconic Walls of China. After breakfast, today we tour into NSW by crossing the Mildura Bridge to Buronga. We join the Arumpa Road to Mungo National Park.

On arrival at the Visitor Centre, we learn some of the stories relating to the Dreamtime period, followed by a guided tour to see the evidence of the ancient campsites, fossils, and sea life from this ancient inland waterway – where over 40 thousand relics have been discovered! In 1974, the discovery of the remains which have become known as the ‘Mungo Man’ created worldwide interest. The bones which have been dated as 62,000 years old have completely changed the original theory on the evolution of mankind.

Later, we visit a historic shearing shed made from local pine, put together without the use of a single nail! Lunch is spent at Wentworth, the township built on the junction of the Murray and Darling Rivers, and which was also an important customs town in the paddle steamer era. We return to Mildura after lunch, where we prepare for an unforgettable dinner.

Day 4: Mildura to Swan Hill via the Valley of the Five Rivers & Kyalite (BLD)

After breakfast our travels take us to Euston on the Murrumbidgee River, stopping by Kyalite on the way. Kyalite was built on the Wakool River, a branch of the Edward River. Kyalite is also famous in the area for the abundance of the popular Murray Cod caught here.

Our lunch stop will be at the Kyalite Hotel, which is well known in the district and has been restored to its original state over the years by its owners.

Later, our tour continues to the little settlement of Toolebuck before again crossing the Murray River to Swan Hill. After dinner, visit the Swan Hill Pioneer Settlement for the ‘Heartbeat of the Murray’ sound and light show. Recently the winner of the International Laser Design Association’s prestigious award for multimedia shows, the ‘Heartbeat of the Murray’ will definitely tantalise your senses and imagination.
The show will take you through the settlement, stopping along the way at homesteads, blacksmiths, a church, stores, wharf, Aboriginal sites and the lower Murray Inn. At each stop the buildings light up and depict the activities of pioneer life, telling the story of bygone days. It is a 360-degree spectacular that is unlike anything ever seen in Australia, using light, water, laser, sound and special effects. What a way to end a great day!

This morning we depart Swan Hill for our tour back to Adelaide. We tour to Lake Tyrell. At the salt lake, the most incredible reflections can be seen! Lake Tyrell and its surrounding salt lakes were formed as a result of the inundation of the Murray-Darling Basin through sea level rise and its subsequent retreat. Hundreds of international tourists fly directly to Sea Lake to take photographs of the most amazing sights and reflections imaginable!

Later, we stop at the Mallee township of Ouyen. Located in vast wheat fields and sheep grazing lands, Ouyen has often recorded the hottest temperatures in Victoria during the summer. After a short stop here, we continue along the Mallee Highway and cross the South Australian border before arriving in the town of Pinnaroo. Enjoy a short break in the town before we set off for Tailem Bend and Adelaide. Adelaide travellers will be met on arrival at the Adelaide Central Bus Station and transferred home by chauffeured vehicle.

Post-Tour Night for Interstate Connections Only

Stay the night on return to Adelaide and fly home the following day.

On our tour’s return to Adelaide, you will be taken to your hotel in the city centre. The next day, enjoy some time at leisure to explore Adelaide. Ask us about optional tours that are available today. Later, you will be transferred to the airport in time for your flight.

Flights included in your price - as required

Transfers from home included - Adelaide only

Ready to book or just want a quote?

See the price for your holiday on the right, then click the Book Now button to proceed.

Place your booking online today and receive a confirmation from our award-winning team within 24 working hours.

Paying just a deposit?
If you choose to only pay a deposit for your holiday today, please note when the balance of your booking is due by clicking here.

Tour booking conditions
By placing a booking online now, you accept the cancellation policy for this tour.

See the price for your holiday on the right, then fill out the form below to send us your enquiry.

One of our award-winning consultants will reply to you within the next 24 business hours.

Book one of our Travel Mates day tours

Join us on one of our exciting Travel Mates day tours in South Australia!

The $50 membership fee is included as part of your tour price.

View the prices for your departure date & city

View the prices for your departure date

Please select from the options below to view the price for your chosen departure date, city & tour options.

Join now for a $50 Membership Fee

Pay for your $50 once-off membership fee now and use it towards your next holiday booking with us on any of our tours!

Prices departing from other Australian airports are available on request.
Please use the Enquiry Only tab for more details.

Pre-register for this new tour now.

Please fill out the enquiry form to pre-register your interest for this tour.

We'll be in contact as soon as more information is available.

Enquire about this holiday now.

Please fill out the form to enquire about this tour.

A consultant will reply back to you within the next 24 working hours.

Join our free Travel Club & get deals sent to your inbox!